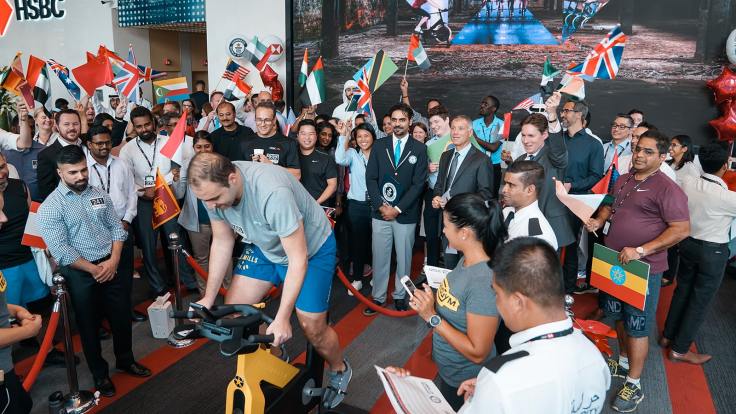 HSBC employees from 68 countries and territories have pedalled their way to a Guinness World Record at an event to mark the opening of the bank’s new UAE headquarters in Dubai.

A total of 344 people helped break the record for the Most Nationalities in a Static Bike Cycling Relay by taking turns to cycle the equivalent of at least 1 kilometre each. They beat the previous record of 53 nationalities, set in June 2018.

Abdulfattah Sharaf, CEO of HSBC UAE, said: “This achievement is a celebration of the diversity of the global banking talent at HSBC – both Emiratis and international staff – and the ambitions we have to continue to help make history here in the UAE.”

The record-breaking event marked the inauguration of the USD250 million HSBC Tower in Dubai.

The 20-storey building has received a Gold rating for Leadership in Energy and Environmental Design – a globally recognised symbol of green building performance. It was designed with flexible working in mind and features collaboration hubs, an innovation lab and a new HSBC University site.

Speaking at the opening ceremony, HSBC Group Chief Executive John Flint said: “Investing in the Middle East to build a new world-class headquarters for the UAE embodies our enduring belief in the strength of the businesses here and their place in the world.

“We opened the first bank in Dubai in 1946 and we are proud to have been a pioneer in the UAE’s financial story. The UAE is a market in which we want to invest and grow, bringing more of HSBC to more people.”