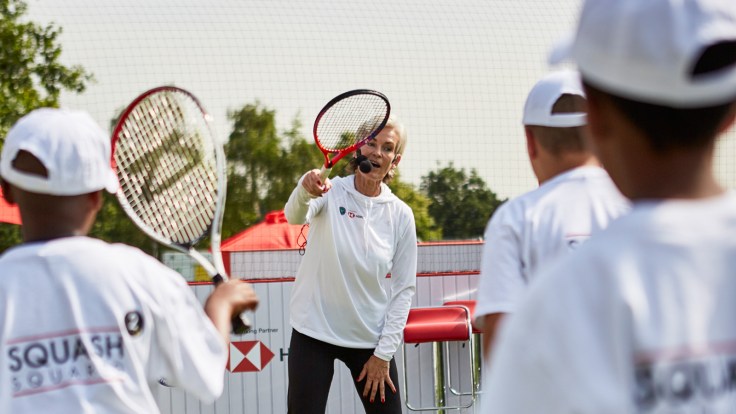 Tennis coach Judy Murray is a former Scottish National Coach and captain of the GB Fed Cup team – the World Cup of women’s tennis – as well as mother to Grand Slam champions Andy and Jamie. With the final weekend of Wimbledon approaching, the HSBC ambassador shares her thoughts on the sport and how to succeed, both on and off the court.

It’s one of the biggest sporting events in the world and is steeped in tradition and history – the fact that players have to wear all white, for example, and that it has retained the grass courts. Hardly any countries apart from the UK and Australia have grass court tennis nowadays.

“For me, a barrier is not a brick wall but something you can find a way to get over, under or around”

As part of your work with HSBC, you run coaching sessions for children. Why is encouraging grass roots tennis so important?

I started out as a volunteer coach in our local club when my boys were in nappies, so I have been coaching for almost 30 years now. When I stopped doing the Fed Cup job a couple of years ago, I made a conscious decision to move away from performance tennis and go back into grass roots. I realised I could have a much longer-term effect on the game’s growth this way, and also by sharing what I’ve learned with the people who deliver the game to others. I’m keen to help tennis shed the elitist image it has had for a long time, so I do a lot of work building workforces in disadvantaged and rural areas.

What are your tips for encouraging children to get into tennis?

You can learn the skills you need to play tennis anywhere. My boys started by playing balloon tennis across the sofa. We also played tennis on the kitchen table, with cereal boxes for the net, a biscuit tin lid and a ping pong ball. My philosophy is to make it fun, and create games and exercises that do the teaching for you.

Do you see tennis as a truly global sport?

There are definitely places where it needs to grow. I think there is a massive opportunity in Asia, particularly China. Li Na winning the French and Australian Opens was huge, and China is hosting the Women’s Tennis Association (WTA) finals from 2019. In September I’m going to WTA events in Beijing and Wuhan to run some clinics and workshops for coaches, teachers and parents.

Tennis coaching is a largely male environment. How did you deal with that?

When I did my most recent coaching qualification, in 1995, there were 18 men on my course and only two women. I found it quite an intimidating environment, and in those situations it’s difficult to find your voice or establish a presence. But it did make me work hard and realise that I mustn’t let anyone make me feel bad about being there.

What advice would you give to other women in male-dominated industries?

If you work hard your results will speak for themselves. For me that was what happened, when the players I worked with from Scotland Juniors started to win lots of British titles. You also need like-minded people you can share ideas and create a working relationship with; otherwise it can be very isolating. When I started working and travelling with the Fed Cup team, I noticed straight away that all the coaches were men. For this reason, I’m doing a lot of work in trying to build a bigger female tennis coach workforce in Britain. I think when you bring a group of women with a common purpose together they will go above and beyond, and tend to be very willing to network and share ideas.

You and your family have had to deal with a lot of expectation from others. How do you cope with that?

I’ve found it hardest to deal with the expectation from the public and the media that’s come since Andy and Jamie reached the top of the game. Getting to the top is an adventure, but it’s harder to stay there because you’re defending something all the time and everyone is trying to knock you off. And when Andy or Jamie have one bad result now, everyone gives their opinion on what needs to change. I haven’t enjoyed this environment so much and don’t go and watch them often now. I have probably found this expectation harder to deal with than my sons have. One way I cope with this kind of stress is to exercise – even if it’s just going for a walk or cycle in the fresh air or a swim.

What have been your biggest setbacks and how did you deal with them?

One of the biggest in the early days was when we were looking for funding for Andy to go and train in Barcelona when he was 15. We needed GBP35,000 a year and the Lawn Tennis Association gave us GBP10,000, which still left me with a mountain to climb. But I didn’t let it be a setback – for me, a barrier is not a brick wall but something you can find a way to get over, under or around. The hardest setbacks emotionally are when Andy or Jamie have lost a Grand Slam final. They feel they’ve let everyone down and don’t know if they’ll get the chance again, and it can be incredibly tough for the family supporting them, during the event and after. But by analysing these matches from video footage you can work out what to do differently next time. You always learn more from the defeats than the victories – defeats are just more painful.