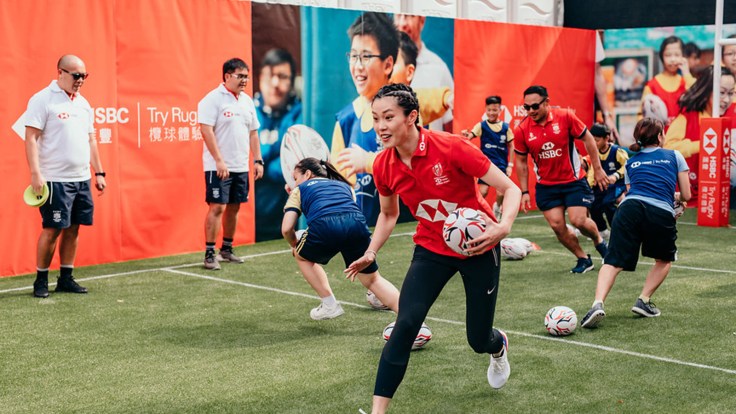 The Hong Kong Sevens (5–7 April 2019) is viewed as the one of the highlights of the rugby calendar.

Men’s and women’s teams from around the world will be competing in the event, which is joint-sponsored by HSBC.

But away from the high-profile tournaments it supports, the bank is also helping to give the young stars of the future a chance to play. HSBC rugby programmes reached more than 100,000 children across the world last year.

This includes more than 30,000 young people in Hong Kong taking part in ‘Try Rugby’ taster sessions and tournaments. Organisers have also held coaching clinics for 469 teachers in Hong Kong schools to help spread the game since the scheme launched in 2017.

HSBC also set up the ‘Rookie Rugby’ scheme in Canada to get more young people involved in the sport. This has seen more than 24,000 take part in skills classes and events organised by the bank.

HSBC Head of Rugby Sven Gloor said: “We are committed to attracting and accelerating the development of future talent as much as we are focused on supporting the elite game. Grassroots programmes can help rugby sevens thrive for years to come and they are a central part of our rugby partnerships programme around the world.”

Rugby sevens is a fast-paced form of the game, with seven players on each team and matches divided into two halves of seven minutes each. It is played in more than 100 countries and territories worldwide.

The rising profile of sevens has helped attract new fans and players to the sport – particularly in the women’s game, with more than 1.5 million women now playing rugby worldwide.

HSBC’s connection with rugby goes back to the 19th century when it started its first official employee teams. The comic author P G Wodehouse, who worked for the bank before becoming a full-time writer, once played on an HSBC team.